Celebrating a full house at the opening for Casuarina Village 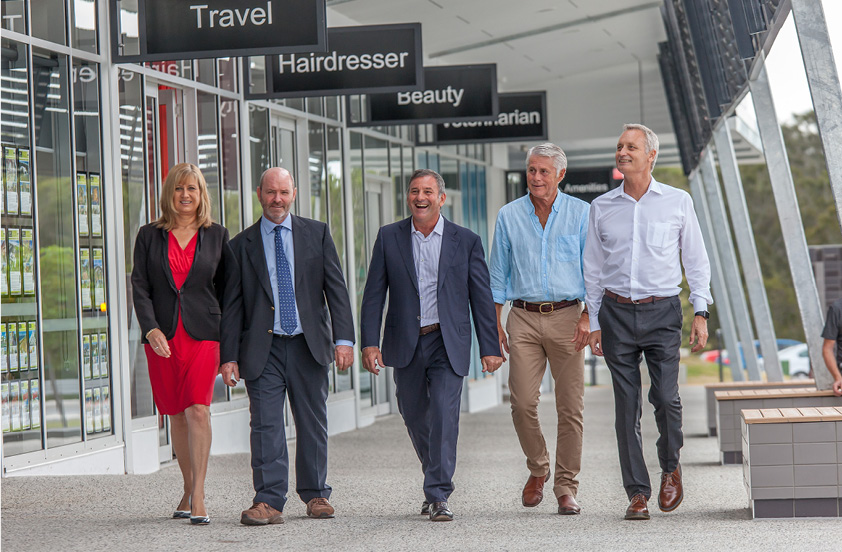 On the 11th April, 2016 we celebrated the official opening of Casuarina Village Shopping Centre, which is now a full house after surf retail giant Rip Curl secured the final tenancy in the precinct.

Rip Curl has signed a lease for a 144sqm space and expects to open its doors as early as July.

The $25 million centre also includes a 2500sqm market-style Coles, which is the only full-line supermarket in the Salt Village/Casuarina residential and resort precinct.

Our Chairman Don O’Rorke was today joined by Tweed Deputy Mayor Gary Bagnall, Member for Tweed Geoff Provest and Member for Richmond Justine Elliot on a tour of Casuarina Village, which has already been branded a ‘great success.’

“Casuarina Village has had an extremely successful first few weeks of trade, vindicating our decision to create a dedicated retail hub for the Casuarina township,” Mr O’Rorke said.

“The centre has created 100 ongoing jobs and is a fantastic asset for residents and the thousands of tourists who holiday at Casuarina and Salt Village each year and can now shop locally, providing an additional boost to the region’s economy.

“Traders are reporting plenty of repeat business from locals who are staying loyal to their new neighbourhood centre, and we’ve had positive feedback from customers in regard to the centre’s design and the mix of tenants.”

Member for Tweed, Geoff Provest, said the Casuarina Village Shopping Centre was a great asset to the community.

“This new centre will allow local people with local ideas to gain exposure and prominence within the community, and the way in which Casuarina Village Shopping Centre has stepped in that direction is to be applauded,” said Mr Provest.

“Around 220 jobs were created in the process of development, and the 100 ongoing, long-term jobs within the centre will have an enormous impact on the local community.”

Member for Richmond Justine Elliot said the shops and services Casuarina Village would provide for locals and tourists would be significant for the local economy.

“Casuarina Village Shopping Centre is a great addition to the area, not just for Casuarina but for the Tweed Coast and indeed for the entire Tweed Valley,” she said.

“I think particularly looking at the local economy relying on tourism and retail, this centre adds so much value and is especially great for the locals who already love the new services they can access right on their doorstep.”

Owner of The Baker’s Cafe, Simon Harrop, says his business has had a strong start at Casuarina Village.

“The centre has a great location on the corner of two major roads, so we get a lot of tradies stopping in on their way to work, along with many Casuarina residents who have become regulars and use the cafe as a place to catch up with friends,” he said.

“We have just introduced our new menu, which has quick bites that people can enjoy when they visit to do their grocery shopping, as Coles is right next door to us.”

“I’ve lived in Casuarina for 13 years and I’ve always loved it here, but now it’s even better because I can shop locally instead of having to drive to Kingscliff or Cabarita,” she said.

“The variety of stores is excellent and the retailers are friendly and offer great service.

The centre is located on the corner of Grand Parade and Casuarina Way, which links the north and central residential villages of Casuarina Beach, and also provides a direct connection to the adjoining $1 billion Salt Village community.