The Chariots of Backfire take on 24 Hours of LeMons! 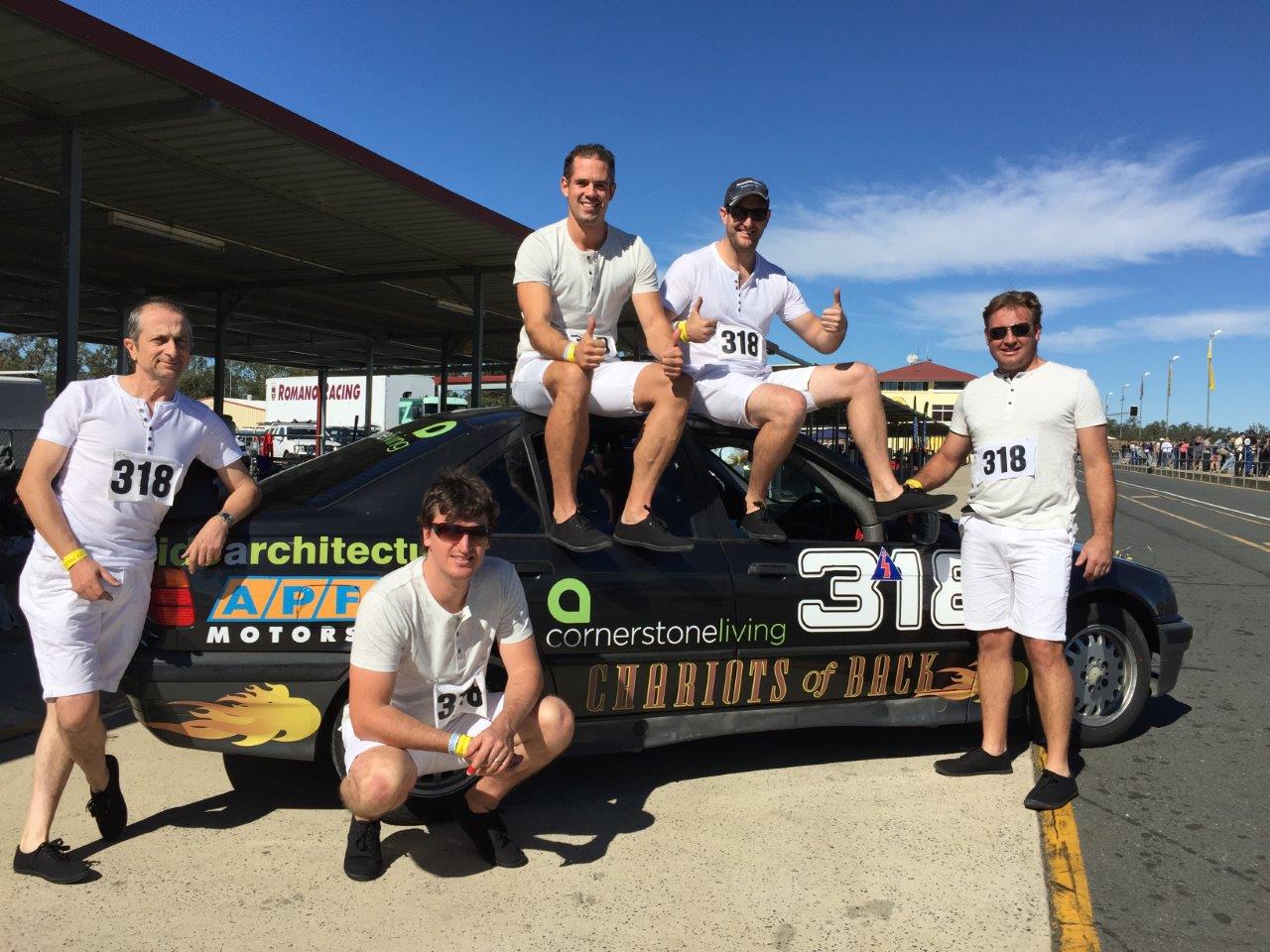 From the 27th – 29th of May, Lachlan Grantley our managing director of residential and Scott Macgregor our residential development manager participated in ’24 Hours of LeMons’ which took place at the Queensland Raceway.

What is 24 Hours of LeMons? Well, it’s an Australian endurance race for cars under $999!

Their team was strategically called “Chariots of Backfire”! Their prized vehicle was a 1994 BMW 318i, it had approximately 370,000 k’s on the clock and put them back a whopping $300!

Each team had 5-6 drivers. “Chariots of Backfire” consisted of 6 enthusiastic drivers and one dedicated pit crew member. The team members were:

Below is an overview of the event by Scott Macgregor:

After several weeks of preparation our Chariot (1994 BMW 318i) was ready to race, or so we thought.  Leading up to race day we had completely stripped the car back to bare metal, installed a roll cage, racing harnesses, racing seat, kill switches and various other mandatory safety modifications. The rule book stated that if the modification saves your life, it didn’t count towards the $1000 budget. We therefore upgraded the brakes, tyres, wheel bearings and the like. Given the car only cost $300 to buy it left us $700 in the kitty to perform a service and replace other basic part like fan belts, hoses and filters.

On Friday the 27th May the team arrived to the race track to put the car through race scrutineering and things were looking promising until they tested the kill switch and……the car kept running. We have a big problem.

We then spent the next several hours fumbling around with the cars electronics before one of the other teams obviously felt sorry for us, and helped us rewire the cars ignition. While this was happening we were putting our other skills to good use applying stickers to the car. We finally got the car passed by scrutineering with about 30 mins of practice left. It was at this time (4:30pm) that we realised the car was misfiring at about 4000rpm.

Saturday the 28th May was day 1 of racing. After a drivers briefing the flag was dropped and we were off and racing (on 3 cylinders). Other than the fact we had limited power and couldn’t rev past 4000rpm we set off. We had a relatively successfully day gradually improving our lap times throughout the day learning how to nurture the car around the track as fast as possible.

Albeit the slowest car on the track we lived true to the moto “slow and steady wins the race”. Many other teams were having mechanical issues throughout the first day given their overenthusiastic driving, We managed to complete over 200 laps before the race wrapped up for the day and  celebrated by blowing the froth off a couple coldies.

While reflecting on the days events we sat around googling how to be a mechanic and after several you tube video’s we were pretty much fully qualified. Given the lack of replacement parts we started dismantling the engine using everything from sticky tape to a soldering iron to try and fix our problems. Even the most seasoned of bush mechanics would have been proud of our efforts. Admittedly the workmanship got a little shaky by the 8th beer…

Day 2 and we were off and racing again eager to see if our mechanical ingenuity had paid off. The lap times looked promising and we thought we had done it, however the celebrations were short lived when the car was towed back into the pits after only 14 laps. The car was having gearbox and clutch issues. After standing around scratching our heads looking blankly at eachother for several minutes we referred the matter back to Dr Google.  The symptoms were not promising. Again one of the teams came to our salvation and had suggested some dodgy repair jobs, and after cutting a hole in the gearbox housing with a 4 inch grinder, we discovered that damage was greater than anticipated. Game over.

In true Lemon’s style we pushed our car over the finish line at the end of the days to officially finish the race. Surprisingly we still beat several other teams who had encountered a similar fate but had completed less laps than us.

All in all it was a fantastic experience and a world of fun. It is unfortunate that we were burdened with mechanical issues however not all was lost.  The main achievement for us was the fact that we raised over $8,000 for the Prostate Cancer Foundation of Australia. Our goal was to raise $5,000 and we are proud to say that we achieved well beyond this. We would like to send out a BIG thank you to everyone that donated to our ‘everyday hero page’!!